Soda Ash is one of the most basic chemicals we use in our everyday lives and an essential component of many manufactured products.
About 50% of soda ash is used by the glass industry: Flat & Float glass for the housing exteriors and decorations, Business building and automotive car industries, Hollow Glass Container glass for consumer products.
Other glass-related uses include lighting, fiberglass insulation manufacturing, homeware glassware, screens for consumer electronics, and also solar panels.
Soda Ash is used solid soaps, powdered detergents, and other cleaning applications.
It is mainly used to increase swimming pools' alkalinity, by managing the proper pH balance of the water.
In pharmaceuticals, it provides the sodium source, also in food preservatives, adhesives as well as pulp and paper. In metallurgy also Soda Ash used as raw material in some sectors of ,
e.g. removing phosphates and sulfurs from non-ferrous or ferrous ores, used in recycling aluminum and zinc.
Additionally, lithium-based batteries, and lead-based batteries recycling, also used as smelting flux and flotation agents. 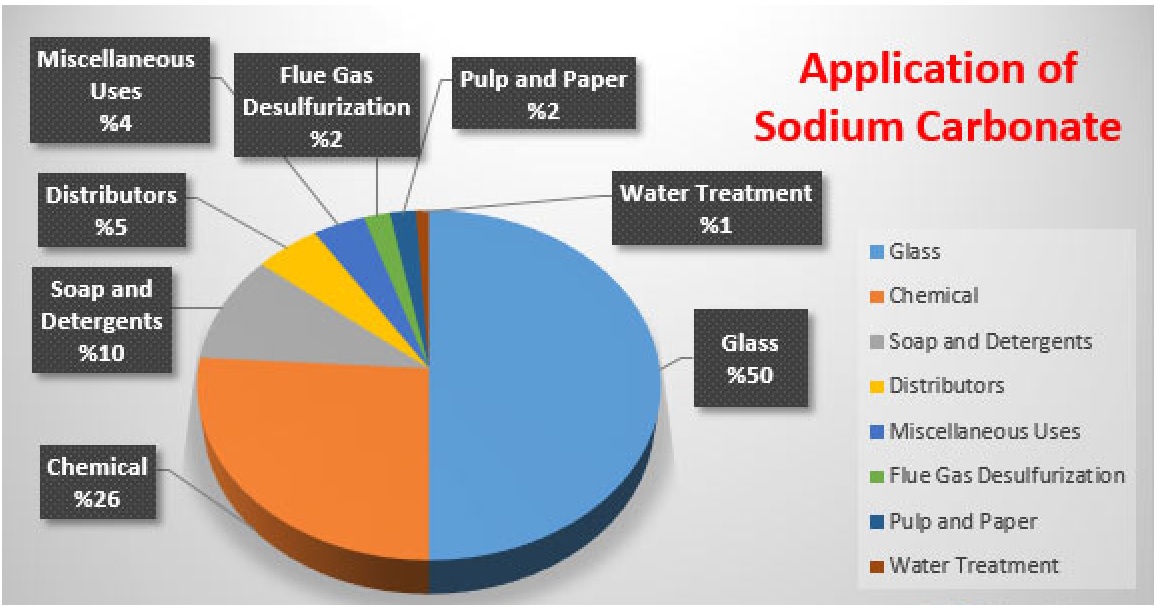 1. Making Glass
Glassmaking is one of the most popular applications for hydrogen (Na2CO3) the use of soda ash reduces the temperature of glass-forming from 1700 to 1500 degrees celsius.
The Glass industry consumes a considerable amount of global energy consumption.

2. Chemical production
Sodium carbonate is used in the pharmaceutical industry and besides the production of Sodium Carbonate other products could be produced  during the same manufacturing process by adding other ingredients such as Sodium bicarbonate, also if mixed with other raw materials like silica Sand it produces sodium silicate,
Soda Ash also used in manufacturing sodium triple phosphate, sodium dichromate, sodium aluminate. etc.

3. Paper production
Sodium carbonate is used as an acidity regulator in paper production and the decolorization processes during paper manufacturing.

4. Soap production
Soda ash serves as an alkalizing agent so it is the main ingredient in soap manufacturing.

5. Water Softening
One of the main problems is the stiffness of water so soda ash ( sodium carbonate ) acts to enhance the ion exchange mechanism that decreases the stiffness of the water by removing calcium and magnesium ions.

6. Urban Water Tanks
Soda Ash ( Sodium Carbonate ) acts as neutralizing chlorine’s acidic effect and raising pH.
Its hydrogen-based compound structure has made it a common additive in urban tanks for

7. Dyeing industry
Sodium carbonate acts as a bonding agent for dyes and fibers.

8. Food industry
Used as a pH regulator and as a preservative in the processing of certain foods.

9. Electrolysis
Its hydrate serves as speeding up electrolytes in the water decomposition process.

10. Laboratory Chemistry
In the titration process, sodium carbonate is often used as the primary standard.

11. Toothpaste
Soda Ash ( Sodium Carbonate ) as a pH enhancer and foaming agent in the manufacturing of toothpaste.

12. Brick Making
saves water as it acts as a moisturizing agent in pulp processing.

17. Household Uses
Soda Ash ( Sodium Carbonate (Na2CO3) used as a water softener in the laundry, where it removes the bond between magnesium and calcium ions in hard water and avoids the bonding between detergents. Without sodium carbonate, consumers are required to use more detergent to absorb magnesium and calcium ions, which is finally more costly for the consumer.

SODA ASH FEED GRADE
Source of sodium in feeds compound. It works as a pH buffer (regulates the intestinal and gastric acid-base balance). The Uniform distribution of product granulation ensures proper transfer of all the nutrients.

SODA ASH DENSE Compacted Grade
Obtained by grinding soda ash light to finer powder size. This process decreases density and different granulation than the regular dense grade. It could be better for certain applications and processes.